Posted On January 9, 2016 By cezanne Leave a Comment on fusion: VOCODE Posted in Music Software 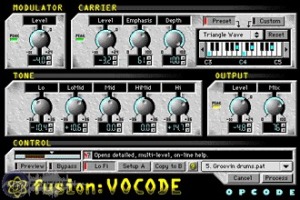 There is nothing new about the concept of vocoders–in fact they have been around since WWII. The core function of a vocoder was to analyze the human voice and recreate it electronically. The voice is a complex sound generating device, and consists of a frequency and amplitude-controlled oscillator known as the larynx, and a set of tone filters, i.e. nasal cavity, mouth and throat. The first thing to do when designing a similar system is to take these individually simple devices and translate them into a block schematic form. Thus a chain may be visualized whose components can be separately converted into discrete circuits-so the larynx becomes a VCO (voice controlled oscillator) coupled with a noise generator, the controlling source being (in synthesizer terms) a DC signal derived from a voicing detector. The final stage would be a multistage voltage – controlled filter bank. Gradually a new picture emerges: we now have in block form the basis for a simple voice synthesizer. So what?

Not so fast! The dawn of electronic music (early eighties) introduced a unique breed of analogue synthesizers that made the hairs of every known musician literally stand on end. The voice synthesizer was now a reality. The vocoder sound was being produced by instruments like the VC10 by Korg, the EMS by MOOG and Syntovox 221. These instruments were able to take any sound and blend its harmonic quality onto another signal. The end result was a single sound with characteristics of both sounds. The percussive and tonal qualities of the modulator were applied to the final carrier signal.

Now a new revolution has begun. The familiar awe inspiring sound has returned to the scene with a little help from OPCODE. They have rekindled and introduced a new face of the vocoder symposium. OPCODE has released a vocoder that installs on a few megabytes of hard drive space and can modulate just about everything except your coffee.

It is obvious that Opcodes success with the Studio Vision and Studio Vision Pro line of products didn’t stop there. The release of this breakthrough plug-in reinforces OPCODE’s understanding of the industry and brings the familiar OPCODE quality to a new plateau. The next step maybe to introduce a suite of Web enabled plug-ins, who knows?

fusion:Vocode doesn’t require you to be an audio file. “The proof is in the pudding” as it is clear in the final processed carrier signal. fusion:VOCODE clearly pervades the fear of the “learning curve” by merely providing a well designed and easy-to-use interface.

fusion:Vocode’s user interface is fresh and clean. The knobs can be manipulated simply by a click and drag. An option to set parameters numerically is also OPCODE fusion:VOCODE mixer control panel available for those precise transactions. Different host applications spawn variations in the mixer interface but not enough to confuse.

Choosing the sound elements to modulate and fuse couldn’t be any easier. The on-board synthesizer engine can create classic analog carrier waveforms. By clicking on a miniature keyboard to make any note or chord to confirm the final signal to the key of your finished musical score. fuson:VOCODE allows you to choose your own carrier waveform by loading an audio file from your hard disk. The CD-ROM contains an interesting collection of looped samples to fuse and manipulate. The unique Emphasis and Depth features far surpass the controls of an analog vocoder. Dial-in the filters and carrier wave for a more intense “vocode” sound.

fusion:VOCODE has a powerful preview function which allows you to tweak the parameters as it recalculates the vocoded waveform in real-time. However, auditioning the sounds and hear the results isn’t instantaneous. This really depends on the processing power of your computer. Virtual Urth ran tests and found that a 10MB file took 3 minutes to process on a P133 with 72MB RAM. Not unbearable and certainly not a reason enough to go out buy the product.

Furthermore, you can store two alternate settings as Setup A and B, then switch between them, arriving at a sound quickly. Save unique settings into a popup preset menu for easy access in the future.

The “Lo-Fi” button gives an authentic retro effect and makes previews much faster on slower CPUs. OPCODE provides a complement of controls for mixing and precisely tailoring the vocoding effect to taste, topped off with a 5-band tone control makes fusion:VOCODE a truly complete tool.

With a little experimentation you’ll soon be creating sounds that even a trusty old Korg VC10 only dreamed of ever being able to produce. Go, go now and buy this, find out what you’re missing.